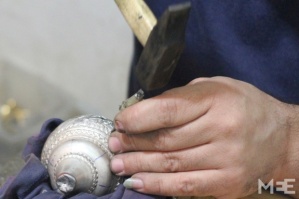 ye – Tunis, Tunisia: Fakher Baklouti’s father taught him to work with olive wood as he was growing up outside of Sfax, an industrial city about halfway down Tunisia’s Mediterranean coast. The texture and patterns in the wood appealed to him, and he found it easy to turn into beautiful, artistic products. Now, Baklouti is proud to be a third generation olive wood artisan carrying on a traditional Tunisian craft. “It’s important for me that it’s purely Tunisian,” he said.

Since the country’s 2011 revolution, Tunisia has experienced a prolonged period of economic malaise that has made life more difficult for Baklouti and other artisans. Tourism has declined, shrinking an important client base, inflation has increased the cost of raw materials and cheap, and smuggled goods from Libya and Algeria have flooded the market.

Searching for opportunity and new markets in a Tunisian economy characterised by over regulation, rampant cronyism and widespread corruption, according to a recent World Bank report, is exceedingly difficult. As a result, Baklouti and other artisans have found it hard to make ends meet.